Every now and then, I like to give my readers a glimpse of what my business looks like on the ground. Here are some photo highlights of the home my buyers closed on yesterday. This property is in the booming H Street/Atlas District neighborhood, and could not be more perfect for this fun-loving, cosmopolitan couple! Take a peek, and give me a shout when you’re ready for me to help you find your fabulous new home! 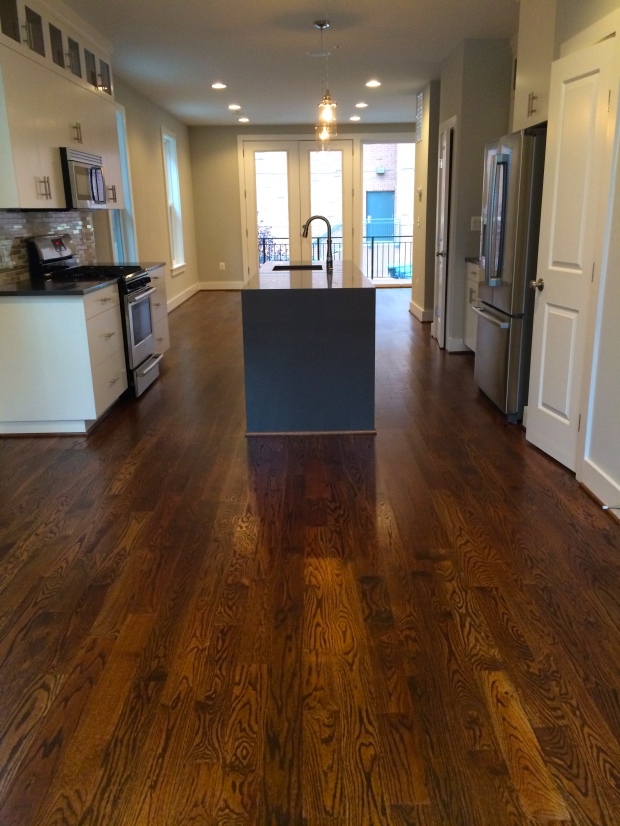 The spacious, open floor plan is perfect for entertaining!

The unit is bordered on one side by a wide alley, meaning that the large, gorgeous windows flood the main with light from three sides. 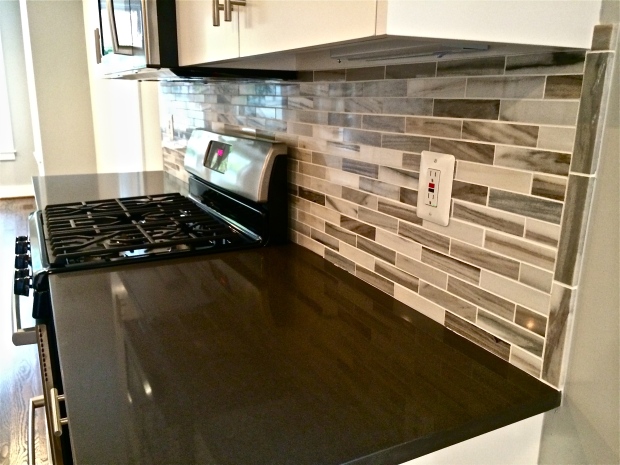 Now that’s a closet that any urban dweller would envy. And this master suite’s got two of ’em!

One of my favorite features of this unit is the gorgeous faux-wood ceramic floor on the lower level. That’s right, that beautiful rustic wood floor you’re looking at is actually ceramic! 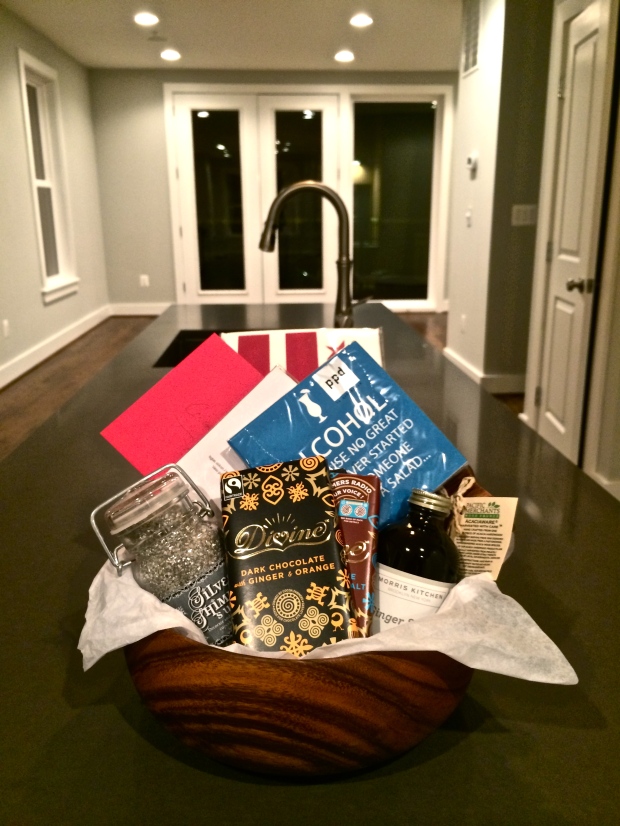 Putting together the closing gift is always one of my favorite parts of the process. 😉

A big congratulations to my happy homeowners!

Thanks to Twitter user @JoeHeim for sharing the news (and the photo!) – the H Street Self Storage building on the 600 block of H St. NE was demolished today. And why is this exciting news? Because, my friends, you are looking at the future site of Whole Foods!! That’s right, DC’s favorite overpriced yuppie haven is that much closer to gracing our neighborhood (and raising our property values!). I’m a sucker for their two-bite cupcakes and pecan-crusted trout, so color me yuppie: I’m thrilled!

The ugliest building on H Street is being wrecking-balled. So long H Street Self Storage. You will not be missed. pic.twitter.com/coLZmRPaxi

H Street and Capitol Hill dwellers have been drooling in anticipation of the Impala Taqueria opening ever since co-owner Troy Hickman and his buddy Erik Bruner-Yang (you know, the guy that owns that little noodle shop down the street?) doled out tacos from the Philly Water Ice window in 2010. At long last, the Impala Cantina & Taqueria opening is upon us! Almost. The owners still won’t commit to an opening day, but assure me that it will be either Wednesday or Thursday. For details on the full menu, check out the piece I wrote for Eater DC. And for the photo tour, just keep on scrollin’! 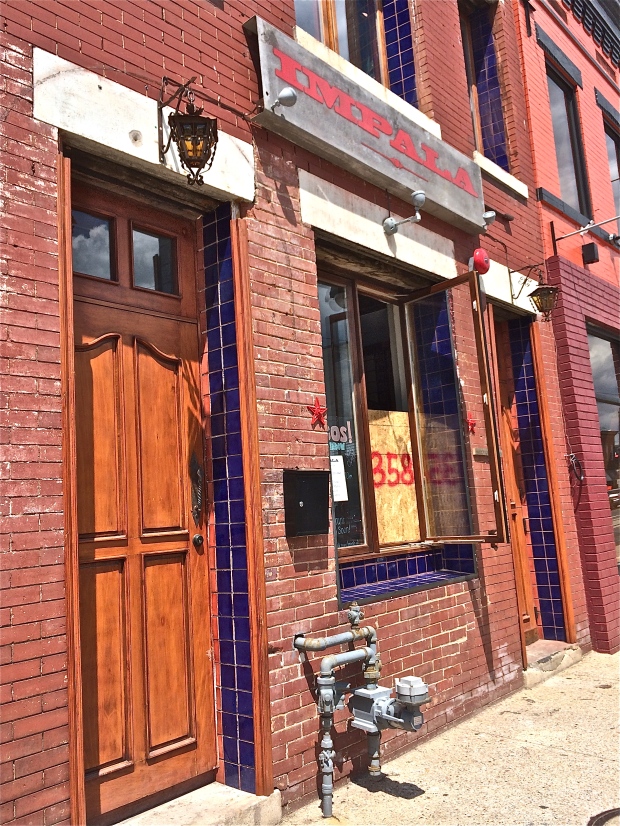 Here’s the limited menu they’ve been serving out of their window for the past couple of months now. The full menu will have a LOT more options, including one of my all-time fave Mexican dishes: elote! (Grilled corn rolled in delicious things like chipotle aioli and cotija cheese.) Again, more details on the menu can be found here.

The restaurant is full of custom-made furniture crafted by the artisans of Tonalá, a Mexican town known for its cavalcade of artisan craftsmen (and women!). Owners George Grau, Troy Hickman, and Ian Holt visited Tonalá and its neighboring towns personally in search of beautiful pieces and inspiration for the custom designs that they commissioned from the artisans of Tonalá. The results are pretty breath-taking. The display cabinets on the walls, the wooden banquettes, and both bars were all custom-made for Impala, and no detail was spared. 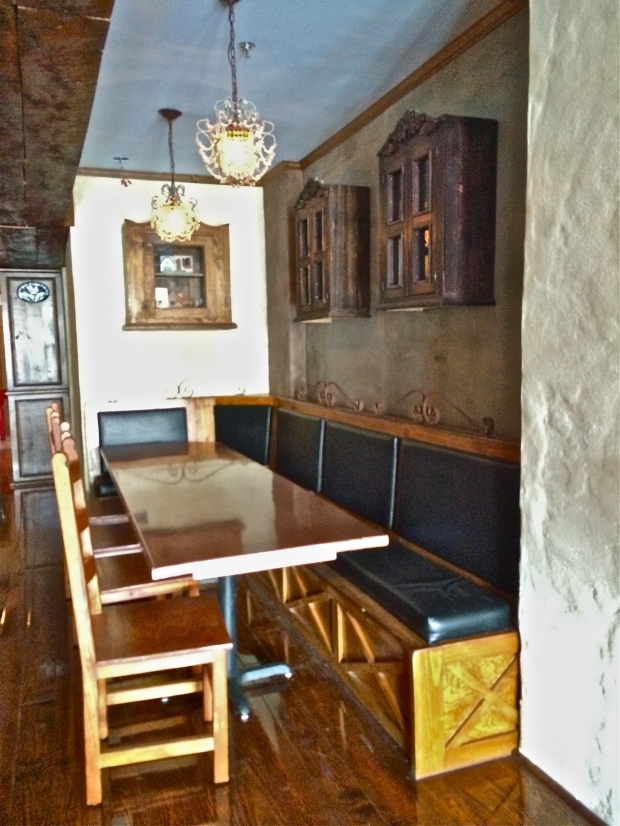 The hand-carved bar on the upper level of the Cantina is one of the most impressive pieces – again, courtesy of the artisans of Tonalá.

Check out that exposed brick wall to the left of the bar. It’s was originally the exterior wall for the next-door building, and you can still see part of the old advertisement/mural that presumably took up the entire wall before the Impala space was built.

There’s only one room at Impala that even vaguely resembles your typical cheesy Mexican restaurant. (You know, the kind that look like a pinata threw up all over the place?) Owner Troy told me that this was their one nod to that particular “tradition” – hence the colorful blanket and the cactus. But even this room is chock-full of gorgeous and rare design details. For instance, look closely at the shelf holding up those pictures – it’s actually a yoke for burros!

The restaurant is also full of beautifully painted ceramic tiles, all straight from Mexico.

The stamped-concrete floor of the downstairs bar is one of my favorite details. It matches the exterior courtyard perfectly, and so when the doors to the patio are opened, it feels like it’s all one giant courtyard. And when the doors are shut, you still get to enjoy that courtyard-esque feel.

The courtyard itself is pretty fabulous too. I LOVE the metal chandeliers up top, and again, am really digging the old-school mural/advertisement that remains from the building’s former life. 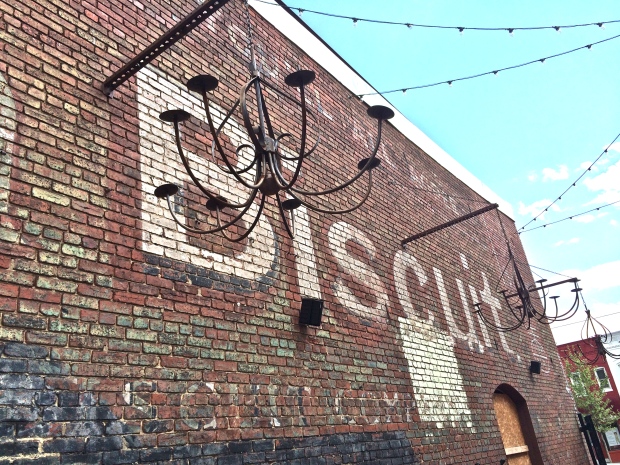 The entire space is filled with beautiful, unique, and ornate touches like this absolutely gorgeous lantern. Some of these touches were imported from Mexico, some were custom-built for Impala, and some are remnants of the building’s past. All of these elements combine into a pretty fantastic – and fascinating – space.

Douglas Development released some updates on their big plans for H Street, and Urban Turf has the info:

Douglas Development is moving forward with plans for a mixed-use project at 501 H Street NE (map) and hopes to break ground in the first quarter of 2015.

“If I broke ground in 12 months, I’d be very happy,” said Douglas’ Paul Millstein on Wednesday prior to presenting the project to the ANC 6C planning and zoning committee meeting. Millstein added that the project would take roughly 12 months to build, putting its delivery in the first quarter of 2016.

The original plan for the development called for 32 units, but that number could be reduced to make room for a few bigger apartments in the building. In talking with some of the project’s neighbors at community meetings, Millstein said, “quite a few families up in the Capitol Hill area want to stay in the city, aren’t ready to buy a home, need two-bedrooms or three-bedrooms, and there’s not that much product.”

The finished product will also include three floors of retail: one below-grade, another at ground level and a third above-grade. Together, the space will comprise 28,000 square feet, which Millstein said will be structured in as flexible a way as possible — meaning several tenants may ultimately end up in the building. Douglas had previously floated something “like” a Crate & Barrel or a Forever 21 for the space, but Millstein clarified on Wednesday that the developers are really just seeking tenants comfortable with multi-level layouts.

I swung by and snapped a few photos of the brand-new “urban” Wal-Mart at 99 H St. NW this morning. (The Wal-Mart at 5929 Georgia Ave. opened yesterday too.) The exterior and entrance lobby are pretty fancy schmancy, but once inside, it looked like a pretty normal Wal-Mart to me – cheap prices, cheap brands, BIG space. It was pretty packed so I didn’t venture too far in, but these shots should give you a good idea of what to expect: 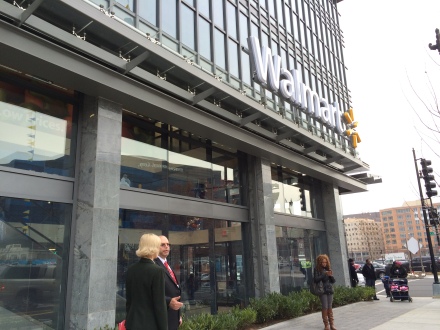 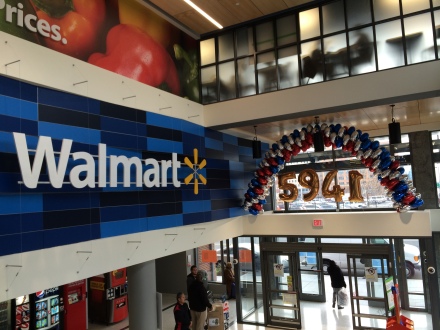 This is the 5941st Wal-mart in the world. For those of you with cars/Zipcars/Car2Go, parking will be free for 2 hours for Wally-world customers.

THE NEXT GENERATION OF DMV REAL ESTATE
As a recovering attorney turned realtor, I work with buyers & sellers, homeowners & investors. Whatever your DMV real estate needs may be, I've got you covered. Licensed in DC, MD, and VA.